Pizza Box: The most terrifying chairlift in Niseko

When people talk about Niseko, it is usually about the famous powder snow, the high-end and modern accommodation facilities, and exceptional local Japanese food. Yet there is an interesting conversation starter that gets many skiers from Europe and US excited. It is the resort’s lift infrastructure and the iconic “Pizza Box” chairlift.

New chairlifts have been introduced in Niseko in the last couple of years. The brand new high-speed eight-seater chairlift and ten-seater gondola launched this season at Hanazono. However, the majority of chairlifts in the resort are decades old, including the one that takes us to the top of Niseko so-called “meat hook” or our favourite term, the “Pizza Box”. Why is it called the “Pizza Box”, you ask?

The chair is literally the size of a pizza box.

There is no safety bar or ski rest. Just a square plank of wood attached to a metal pole hanging off the cable that you can cling onto for dear life. We must say that riding up the hill on this chair lift will raise your heart rate.

What is the history of this chair?

The official name of the Pizza Box is Grand Hirafu King #4 chair lift. The single chair lift fixed-line circulation lift was built by Tokyo Shakudo in 1983 and entered into service on 23 November of that year. It was commissioned by the company Niseko Kogen Sightseeing in Niseko Grand Hirafu ski resort.

Interestingly, this lift is one of the last to be built before the era of the double chair (such as the now replaced Family double chair lift and Ace 3rd pair lift, both built-in 1983, and Ace 4th pair lift built-in 1984). What is the most fascinating is that the Ace Quad Lift opened up in 1985, becoming the first high speed hooded chair lift in the area.

The lift covers a distance of 526 meters and makes 151 meters of vertical ascent. It can transport 720 people per hour, and only the lifties knows precisely how many chairs are hanging on the cable. The speed of 2.5m/s makes it the fastest single chair lift in the area (though we wish it would be faster on stormy days!).

You can reach the peak of Mt. Annupuri on foot from the top of the lift. It takes 20-30 minutes to reach the summit. From there you can either ski back into the resort or venture into the backcountry. We recommend hiring a guide if you want to explore the terrain outside the organized skiing area.

Be a part of Niseko history

The Pizza Box truly is the remaining slice of the past. Those who have ridden the pizza box will agree the experience brings out emotions. Some love the thrill of it. Some can’t stand it. But whichever side you sit on, know that you have had a unique taste of history.

To celebrate the iconic Pizza Box chair lift, we have designed an original Niseko Pizza Box merchandise. Buy a slice of Niseko history from our online shop now. 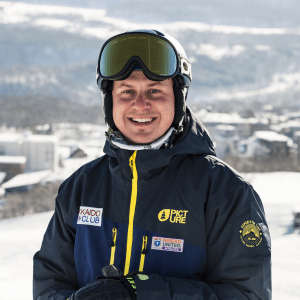 Miha is the Co-Founder and CEO of Hokkaido Ski Club. He loves teaching and sharing his knowledge and passion for skiing and nature.
PrevPreviousHow to get to Niseko: Train vs Plane
NextJapan at Winter Olympics Beijing 2022Next