This is the latest information as of 12 June 2021. The article will be updated as new information arises. If you have any questions regarding the current situation in Niseko, please contact our team at [email protected].

Japan has been in the headlines over the last couple of months for being one of the few developed countries that has been slow to roll out Covid-19 vaccinations. Its lack of swift action has drawn attention and criticism from media outlets worldwide, given its large population (particularly the elderly) and being host to the Summer Olympics that commences next month. People outside of Japan see the country as a straggler and naturally assume that vaccinations are slow or not happening. Overseas tourists have the same image of  popular tourist destinations in Hokkaido, such as the renowned international ski resort here in Niseko.

However, we can report from Niseko that this is not entirely accurate of the current situation on the ground. It is true the initial process of procuring and approving the use of Pfizer, Moderna and AstraZeneca vaccines was slow. Yet the rollout around the country has been relatively fast since the approval of the vaccines. The Japanese government has introduced new schemes for accelerating the administration of vaccines. Until recently, only medical staff were authorised to give vaccines. Approval has since been granted for universities to vaccinate their staff and students. Large companies can also administer the vaccine to employees and their families through their in-house clinics.

The country’s approach towards vaccinations is by age groups. The elderly (65 years and over) are first, followed by those under 65 years of age with underlying medical conditions, and then the rest of the population. Every city is responsible for their residents. They provide information about the vaccinations via mail outs and the internet. Appointments are arranged for every person and mailed out as tickets.

Vaccinations in Niseko have begun

Vaccinations have commenced here in Kutchan town (the town to which Niseko Hirafu and Hanazono ski resorts belong). The vaccination schedule set out for the residents are as follows:

The town started delivering vaccinations at the end of May with the first round of vaccinations given to residents over the age of 75 years. Currently, residents over the age of 65 years are scheduled to be vaccinated at the end of June. This indicates that they are running a little behind their schedule. This is to be expected since vaccine supplies have to be distributed across the country, especially to cities with higher populations such as Tokyo and Osaka.

In addition, a mass vaccination drive has been organised for Niseko tourism-related businesses in early July. This initiative has been implemented by the Kutchan Tourism Association to ensure that businesses in Niseko are prepared and the area is safe and operational for the coming winter season.

A positive outlook ahead

It is a positive sign that vaccinations are happening in Japan and in the Niseko area despite the slow start. The rate of vaccinations has exponentially increased since starting in mid-February. As of 10 June 2021, Our World in Data estimates that 21.41 million of Japan’s population has received the first dose. Over 16 million people received first doses in the month of May. If vaccinations continue at the same rate, all of Japan’s 120 million population should receive their first dose by November 2021. There is hope that the entire population of Kutchan will be vaccinated by the end of the year. This means we will be a step closer to reopening the borders and for international guests to return to Niseko in time for the winter season.

Of course all eyes are on the Olympics and how Japan will handle the games and control of the coronavirus. What happens there remains to be seen. But for now, it is only fair that a truer picture of the current situation here in Japan – that progress has been made on the Covid-19 vaccination rollout –  is projected to the outside world.

For the latest information on the vaccination schedule in Kutchan, head to the Kutchan town website. 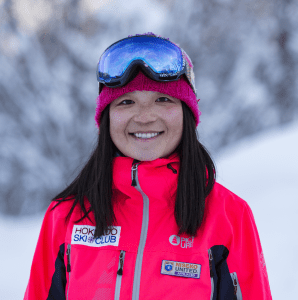 Anthea is the Co-Founder and COO of Hokkaido Ski Club. She also loves teaching ski and snowboard, having almost 20 years of teaching experience as a snowsports instructor, violin and piano teacher. She is passionate about children and education in the hope of making the world a better place. When not on snow, she loves meeting new people, delighting in international cuisines, and spending time with her family.
PrevPreviousWhere to stay in Niseko: Niseko Village and Annupuri
Next5 Niseko cafes that hit the sweet spotNext